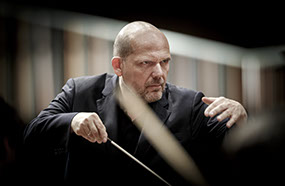 Van Zweden has appeared as guest conductor with many other leading orchestras around the globe, among them the Orchestre de Paris, Amsterdam’s Royal Concertgebouw Orchestra,   Leipzig Gewandhausorchester, Chicago Symphony, Cleveland Orchestra, Los Angeles Philharmonic, Vienna and Berlin Philharmonics, and the London Symphony Orchestra.

Jaap van Zweden has made numerous acclaimed recordings, the most recent of which are a 2020 release with the New York Philharmonic  of the World Premiere of David Lang’s prisoner of the state, and the 2019 release of the World Premiere of Julia Wolfe’s Fire in my mouth, continuing the Philharmonic’s partnership with Decca Gold. In 2018 with the Hong Kong Philharmonic, he completed a four-year project conducting the first-ever performances in Hong Kong of Wagner’s Der Ring des Nibelungen, which have been recorded and released on Naxos Records as individual recordings as well as a complete set.  His highly praised performances of Lohengrin, Die Meistersinger and Parsifal, the latter of which earned Jaap van Zweden the prestigious Edison Award for Best Opera Recording in 2012, are available on CD/DVD.

Born in Amsterdam, Jaap van Zweden was appointed at age nineteen as the youngest-ever concertmaster of the Royal Concertgebouw Orchestra.  He began his conducting career nearly twenty years later in 1996. He remains Honorary Chief Conductor of the Netherlands Radio Philharmonic where he served as Chief Conductor from 2005-2013, served as Chief Conductor of the Royal Flanders Orchestra from 2008-11, and was Music Director from 2008-2018 of the Dallas Symphony Orchestra where he currently holds the title Conductor Laureate.  Van Zweden was named Musical America's 2012 Conductor of the Year and was the subject of an October 2018 CBS 60 Minutes profile. Recently, he was awarded the prestigious 2020 Concertgebouw Prize, and the Hong Kong Philharmonic under Jaap van Zweden’s leadership was named Gramophone’s 2019 Orchestra of the Year.

In 1997, Jaap van Zweden and his wife Aaltje established the Papageno Foundation, the objective being to support families of children with autism. Now, over 20 years later, the Foundation has grown into a multi-faceted organization which, through various initiatives and activities, focuses on the development of children and young adults with autism.  The Foundation provides in-home music therapy to children through a national network of qualified music therapists in the Netherlands; opened the Papageno House in August 2015 (with Her Majesty Queen Maxima in attendance) for young adults with autism to live, work and  participate in the community; created a  research  center at the Papageno House for early diagnosis and treatment of autism and for analyzing  the effects of music therapy on autism; develops funding opportunities to support autism programs; and launched the app, TEAMPapageno, which allows children with autism to communicate with each other through music composition.